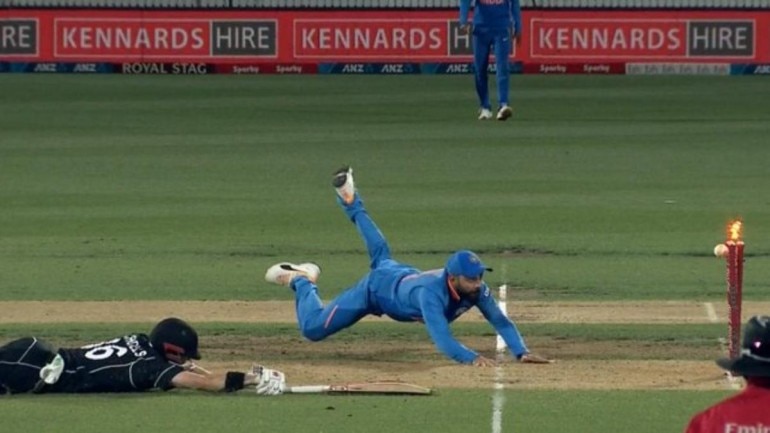 India skipper Virat Kohli was at his majestic best as he affected a sensational run-out with a brilliant in-the-air throw to get rid of Henry Nicholls during the 1st ODI of three-match series at Seddon Park in Hamilton on Wednesday.

Henry Nicholls was going strong after hitting a fifty and in the company of veteran Ross Taylor, he was looking to keep New Zealand abreast with the high asking rate.

It was only then that India skipper Virat Kohli led by an example on the field to inflict a brilliant run-out to dismiss the dangerous Nicholls. Ross Taylor dropped the ball and tried to steal a single when Kohli came swooping from cover, dived to throw and hit the stumps as Nicholls fell inches short of the crease.

Virat Kohli, you beauty. What an effort to run out Nicholls.#NZvsIND pic.twitter.com/pMW0vrx33X

This was not the first time in the New Zealand series that Kohli had effected a brilliant run-out to bring India back in the game. Earlier in the fourth T20I, Colin Munro was run out on 64 by Virat Kohli who received a throw from Shardul Thakur near the non-striker’s end and hit the stumps at the other end in a game-changing moment in the match.

Meanwhile, batting first, India dished out a clinical batting effort to post 347 for four against New Zealand in the first ODI on Wednesday. Virat Kohli made 51 after walking into bat at No. 3 for India at Seddon Park. The India captain hit 6 boundaries in a well-paced knock wherein he was involved in a 100-plus stand with Shreyas Iyer.

During this innings, Kohli went past Sourav Ganguly on the list of players with most runs as captain in ODI cricket. Kohli, with 5123 runs, had gone past Ganguly’s tally of 5104 runs.

Cricket fraternity all across the world was left awestruck with Virat Kohli’s brilliant in-the-air throw to dismiss New Zealand opener.

That was a brilliant in-the-air throw from the India skipper!

Nicholls is run out for 78.#NZvIND pic.twitter.com/ggtPqjipTm

Kohli reacted even before the Ball touching the ground pic.twitter.com/nIJVTYFbiu

AIRBORNE… ALL THE WAY