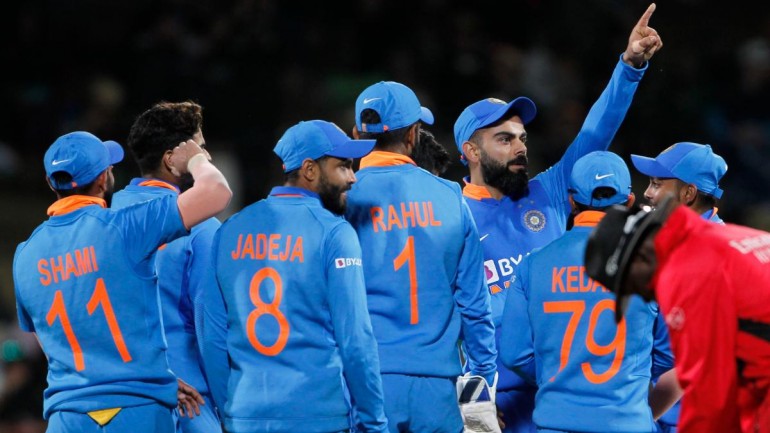 Virat Kohli scored a fifty in the 1st ODI vs New Zealand in Hamilton. ( Courtesy by BCCI)

After going down 5-0 in the T20I series, World Cup finalists New Zealand got back to winning ways with a 4-wicket win over India in the 3-match ODI series opener in Hamilton. After the defeat, India skipper Virat Kohli conceded he was happy with his side’s performance in all the three departments but New Zealand played better cricket than them and hence emerged victorious.

Ross Taylor stood at the crease till the end with 84-ball 109 while stand-in-skipper Tom Latham scored 48 ball-69 as New Zealand gunned down 348 with 11 balls to spare and go 1-0 up in the series. It looked like the match would see a tense finish when the hosts lost 2 wickets in the 46th over birthday boy Mitchell Santner smashed Shardul Thakur for a six and a four in the 48th over to level the score with Taylor finishing it off on the 1st delivery of Mohammed Shami’s last over.

“It was an outstanding performance by New Zealand. They batted outstandingly well. We thought 348 was good enough. Ross is the experienced batsman they have, but Tom’s innings was the one that took away the momentum. Credit to Taylor and Tom,” Virat Kohli said in a post-match interview.

Centurion Taylor escaped an early scare when Kuldeep Yadav dropped him on 10 but Kohli said India were decent on the field except that but will look to keep getting better in that department. Kuldeep Yadav was taken to the cleaners by every opposition batsmen as he conceded 84 runs in his 10 overs, picking 2 wickets while Shardul Thakur gave away 80 runs in 9 overs. Jasprit Bumrah went wicketless but was the most economical bowler for India, giving just 53 in his 10 overs and bowling exceptionally well in the death overs. India also gave away 24 runs through wides.

“Look, we didn’t grab onto one chance, but we were decent. Something we need to keep improving. We can’t focus on too many things. Today, the opposition played better than us and they deserved to win,” Virat Kohli said.

After put in to bat, debutant openers Prithvi Shaw and Mayank Agarwal gave India a promising start but fell in quick succession scoring 20 and 32 respectively. Virat Kohli failed to score a century yet again in 2020 but steadied the ship with his fifty. India’s new No. 4 Shreyas Iyer raised his maiden ODI hundred while KL Rahul showed he could bat at any order, keep wickets and finish the game as well with his unbeaten 83.

“Today, the opposition played better than us and they deserved to win. I think the debutants gave us a good start and hopefully, they continue. Iyer was outstanding getting his first ODI hundred under pressure, KL again. These are positives for us.”